Growing in popularity are target date funds.  These are also known as lifestyle or age based investing.  The idea is that you invest in a fund with a target retirement date.  If you are young with a more distant retirement age, the fund starts out more aggressively, but as you age, the fund moves more conservatively until that age.  Aside from the question about what your age has to do with the markets, the answer incidentally is nothing, the question is how do you hit a moving life expectancy target that extends as you age?

Sports are the prime example of answering the question.  The quarterback leads the receiver, throwing the football not where the running receiver is at, but to where he will be. The soccer player kicks the ball to her teammate not behind her, but to where she will reach the ball in front of her.  Hitting the target is easy to understand in sports, but how about hitting your life expectancy age?  You get to retirement age with a certain expectation, but that won’t necessarily coincide with the same expectation as when you began your program. 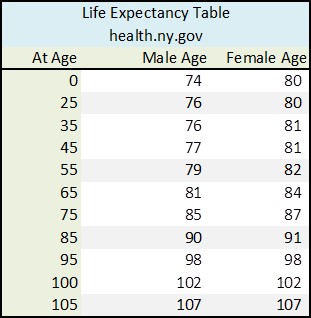 At 90 years old that is a full 14 years longer than what his life expectancy was at age 25 when he may have started to plan for retirement in the first place!

In this example, it is 14 more years of what may have been unplanned for retirement time during which your savings have to continue to outlast your age.

So, hitting the successful investing target is never easy, but it is made even more complicated by having to hit a moving target.  Here are a couple of suggestions.

Rather than focus solely on your retirement age, consider your life expectancy age as you invest.  This would likely extend the target from say 65 to 70 years of age.  If the idea (allocation between stocks and bonds based on retirement age) behind target date funds is valid, then so too is this extension in allocation based on age expectancy.

When advised to think “long term” when investing, this expectancy table means to suggest even a longer term.  Again, add about on average five years longer than what you may be projecting.

PS Visit us at 401kSelections.com and let us help you get the most of your 401k plan!

I enjoy your newsletter immensely. I read it the minute it comes out. I appreciate your conservative stance in these troubling times.

Thanks for the service you provide with the NLMFST newsletter.   It helps me to invest with confidence and stay agile in relation to the market.